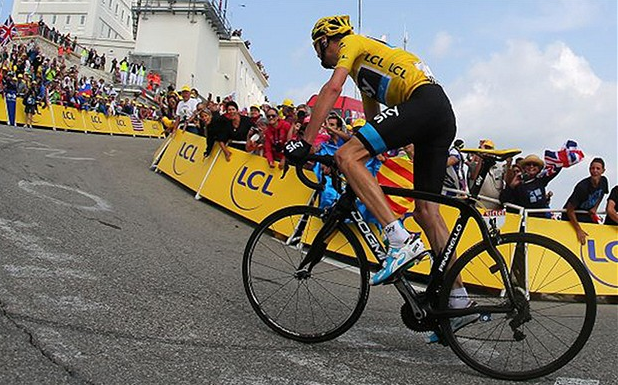 Every morning at around 8:00 am I ride my bike to work. It’s not a far stretch between home and work but it’s a Tour De France sprint that’s for sure. Ever since I was a kid I’ve always loved riding bikes. From the cheap kid’s type to the bespoke fixie handed down from generation to generation. But something that has caught my attention over time is the necessity of cycling and the cheap marketing that businesses gain from it.

Like many sports, what drives professionalism is money. The way we look at sports today is significantly different to how we looked at sports ten years ago… While the technology is incredibly fascinating, it is also interesting to see how cycling has evolved as a sport into a science.

The lycra game is strong with this one, but it is tactical branding in the media and on the roads. With big brand names like Giant, Shimano and Specialized all getting their noses in the money with passive pedal strokes. You can be sure that marketing has grown in conjunction with the technology.

About four years ago I rode my bike between Christchurch to Akaroa in a sportive dubbed “Le Race.” A 6: am wake up ride to the starting line, got into the first hill, and all I clearly remember was bums flying all over the place. You heard it first folks, bums. But on most a gluteus Maximus’ were company names as aforementioned. Whose business is it to put sans serif font on someone’s backside?

Adopting the prejudice towards women cyclists, companies take it upon themselves to promote their brands in this way.

The psychological expectations set by these business modules is ridiculous! Born from this, of course, are standards in equipment. Like the world of motorsport, comes pedal sport? They deem “entry-level performance bikes” to be within the price range of $1000 – $2500 NZD… The term ‘entry’ as to insist that if you ever amount to anything you might one day have money for another engine-less marketing ploy with pedals…

A market exists where you could spend $20 000 for a standard issue pro team sports bike. Last year Italian-born company Pinarello sold their flagship road bike, The Dogma F8, for a meaty $18 999 NZD.  AND THAT WAS LAST YEARS BIKE! When you get to the crux of it, how is a twelve-year-old boy from a middle-income family supposed to catch up with the competition when they have a competitive advantage of $16000?

Each to their own of course! But when it comes to snobbery, cycling knows a thing or two on ways in which to grind people’s gears.

Just a thought… I hope you enjoyed the imagery…

Today’s blog was late as I attended a Funeral so am home tired.