So begins the next challenge. A challenge to myself to try and see if it’s possible that my little legs can manage to squeeze through a mammoth distance on a bike with pedals. The challenge is to bike from Wellington all the way up to New Plymouth using nothing but my legs, about ten coffees, a few litres of water, about 10,000 calories of food, three days and a lot of Coldplay. Today’s conversation is in regarding this bike ride and the discussions of setting goals as a means of finding myself. Doing things not many my age would dream of doing, let alone by themselves.

The trip itself is around 365kilometres. Without fault, the entire trip will take approximately 20 hours and five minutes on the bike non-stop at an assumed estimated moving speed of 16km/h (10mph). Which can I say is probably a really nice estimation because, with a head of my size, climbing hills can be a slow and arduous journey.

So what gear would be needed? Well beyond the obvious unprecedented motivational concentration, the endless supply of coffee shop visits, taking an invested interest in making sure that there were stores and stores of food supplies kept in bike mounted saddle and frame bags, the overall journey would be a thing of surviving with plenty of food – and I love food! My next biggest concern would be making sure that I had sufficient water to hydrate the exhaustion. The large amounts of sweat loss through the heavy anaerobic exercising would require plenty of water to make sure that I never became dehydrated.

Bike rides require a hydrating period of around 200ml per 30 minutes of consistent efforts. But I know that from my own experience doing races and tours that I can survive off around a 500ml bottle every 90 minutes. So I’d really need to make sure that if my day was around the distance of 200km per day then I’d need to be carrying around 10 hours’ worth of water, per day. So then that would be around 5 litres of water per day. Definitely something essential. I would much rather have a lot more water than not enough. So finding passages in which these water bottles could be held, such as extra water bottle holders would be ideal.

The next concern is the weight on the bike. I’d need to make sure that there wasn’t too much on the bike because it makes it harder to ride up hills. Thankfully there are plenty of places to stop along the way during state highway one which will give me plenty of opportunities to stop in and reloaded. It’s only once turning west bound heading for Wanganui which will have any extended period of nowhere to refuel, and it will be a case of making sure that I have plenty of water and food with me. With extra water bottles, and extra food stores will make the bike heavier, as expected. But it will be about rationing out everything to make sure that I don’t run dry.

So I’d start from Wellington City and ride across Hutt Valley City, to then hook back around the hills of Upper Hutt via Haywards Hill Road. After stopping for a morning break in Paraparaumu I’d continue travelling north along State Highway One and travel northwards passed Levin and Sanson where I’d make the turnoff to Whanganui in Bulls. It’s around 100 further kilometers before the west bound region where I’d stay the night. 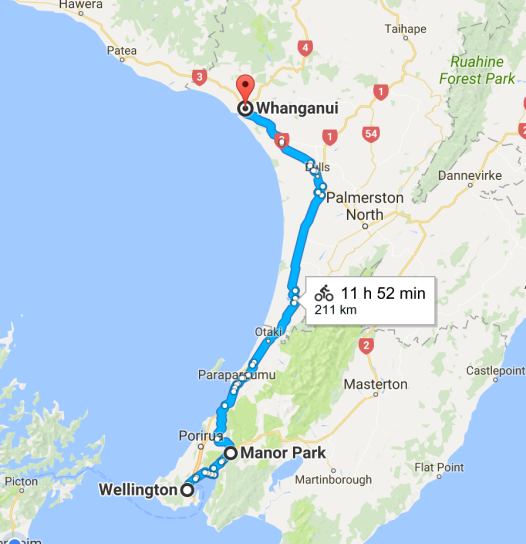 On the second day I would continue travelling north-west to Mount Taranaki where I’d then rest in the surrounding township. Apparently, there is significant climbing involved near the mountain so this day will likely take longer than the first. Noting that it is more hilly through this region I’d likely take a lot more water on the second day because there are less places to stop and more terrain to take on. Once I’ve met the Taranaki mountain reserve I’d then turn right to then continue riding down into New Plymouth where I’d catch up with Aaron and the lads, hopefully! 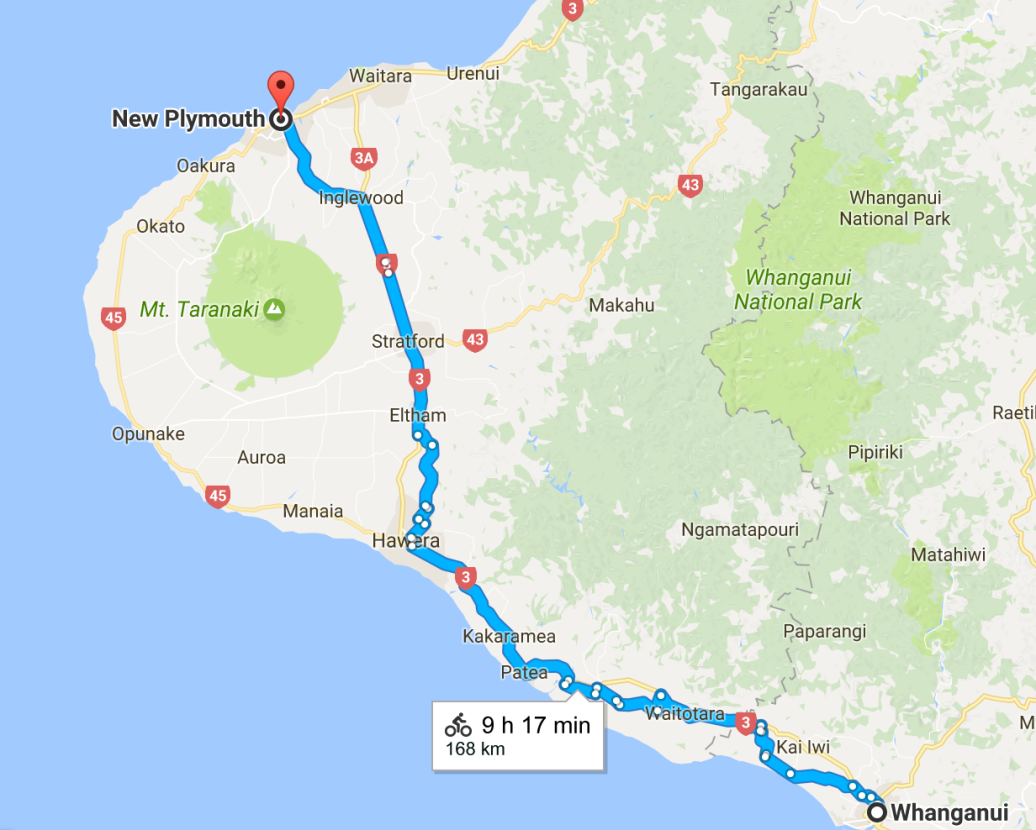 With the overall journey well within my capabilities at approximately 20-25km/h speeds maintained across the two days should see me through in a reasonable time. My only concern is bike mechanicals. water depletion and extreme changes in weather. My other main concerns are the likes of health and warmth. As this ride will occur during the winter time, it will be cold at 360m above sea level heading across the Taranaki region. So a nice warm set of gears will be essential.

But what is all this for? Why is it important for me to even bother trying to push through two days of hell and for what reason? Well for a starter I really genuinely enjoy riding my bike. The feeling of independence, and the weird things that you see along your way that make me laugh really hard. But I’m mostly setting this goal so that I can be challenged. To challenge my brain in a way that I cannot pull out of. I cannot back down to. Stuck in the middle of nowhere on a bike is very isolating. I love cycling because it forces you to rely on yourself. It forces you to focus on things that actually matter like family and friends. It’s hard to lie to yourself when your pushing a headwind.

For me, the aim is to create a space where I can get out of the shit that urban life creates. A space where I can be reliant on nobody but myself, where nobody but I can define how the journey goes. It will be a really great journey as well because I come from the South Island of New Zealand, so I’m basically becoming a tourist for three days. Sight seeing, suffering, looking at the different features of the country, suffering, seeing what the people are life and suffering. I’m incredibly excited by this but mostly because it means I will get the opportunity to meditate, to think about nothing but my own thoughts.

It’s something we don’t really do enough as a people is reflect on what we have. What we’ve got to actually be grateful for. The fact that I have the opportunity to do something like this is incredible. That so many people don’t have the luxury to take a few days off to ride their bike. So I will setup a fundraiser over the following month to assign an invested interest in others and garner support to accomplish this. Because ultimately it’s those who are around you who define how far you go.

Looking at practical times there are two main holidays this year where I will have the opportunity to accomplish this ride:

Ultimately it’s a goal that I am extremely enthused to complete. Stay tuned for more information regarding this in the near future. Never stop moving, always keep growing. Even if it’s completely ridiculous and entirely crazy like going for a bike ride, doing it easy mate…